This week I’ve been lucky enough to witness a small miracle – baby house sparrows, a species much in decline in the UK, hatching in the rosemary bush under my kitchen window. Very interesting, but what does this have to do with writing, you may ask. Absolutely nothing, but I took some photographs and added the experience to my ever-expanding list of distracting time fillers, seized upon so that I can further avoid the inevitable – facing that frightening blank page. 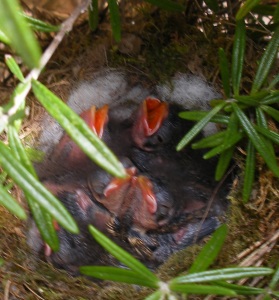 I decided to write them all down, the little non-essential deviations and digressions, to see how much time I was wasting when I should be labouring at the keyboard.

In the last month I have:

• Monitored baby sparrows until they fledged
• Prepared an interview for a local business magazine
• Given a talk to a local book group
• Prepared material for an appearance on local radio
• Put systemic weed killer on the drive, patio and pathways
• Invigilated at various state exams at local school
• Taken several walks on the beach
• Attempted golf lessons
• Kept abreast of Facebook and Twitter
• Written this blog
• Read, read, read.

I could argue that much of this procrastination is useful promotion and some of it is absolutely essential. The weather round these parts, for example, has been so unpredictable, so downright horrible for most of the summer so far, that I have to get out in the sunshine whenever that mysterious yellow orb shows itself in the sky. And yet… I still feel guilty.

I can’t rid myself of the nagging feeling that time spent away from the keyboard is time somehow wasted. Sensibly, I know I’m a much better writer when I indulge myself from time to time. Fresh air and vitamin D are very important. Talking to my peers about books and writing feeds my soul. Reading is my absolute downfall; there just aren’t enough hours in the day, even when I wake with the dawn chorus and squeeze in yet more book-time. But while I’m hopefully absorbing the wisdom of the masters by osmosis, who’s committing my major opus to paper and screen?

I can’t lay claim to writer’s block. I don’t really believe in it. I just need to apply myself. After all, it was the great Dorothy Parker who advised that, “Writing is the art of applying the ass to the seat.”

2 thoughts on “Diversions, distractions and digressions”