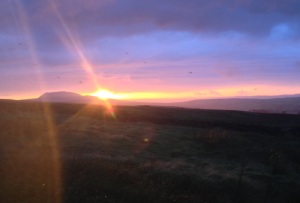 We’re all familiar with the need for a great opening that grabs the reader and draws them into the story, and the need for a cliff hanger at the end of a chapter to encourage the reader to keep turning the page. But what about the ending?

I was recently complimented on the final sentence in my novel, Breaking News and it got me thinking about how we finish our novels and short stories and what we are trying to achieve with that concluding sentence. Whilst the beginning of a book might get all the glory, it’s the powerful ending that stays with you. A book’s last line should square the circle.

Some endings come as a complete surprise, others set up the next part of the saga, or another story entirely. Some give us a proper sense of closure while others leave us at a crossroads. Some are the appropriate and expected endings to complicated plots while others reveal hitherto unseen elements of the story or characters. Some last lines come as such a shock that they disrupt the rest of the story. We are left wondering if this was the author’s intention, or if we have misunderstood something along the way.

I dragged some of my favourites from the bookshelves and studied the last lines. It’s neither a surprise nor a coincidence that I still have these books in my possession, despite having, in the course of several house moves and life changes over the years, gifted hundreds of paperbacks to charity shops, friends and jumble sales.

‘Tomorrow, I’ll think of some way to get him back. After all, tomorrow is another day.’
Gone With the Wind by Margaret Mitchell

‘Lastly, she pictured to herself how this same little sister of hers would, in the after-time, be herself a grown woman; and how she would keep, through all her riper years, the simple and loving heart of her childhood; and how she would gather about her other little children, and make their eyes bright and eager with many a strange tale, perhaps even with the dream of Wonderland of long ago; and how she would feel with all their simple sorrows, and find a pleasure in all their simple joys, remembering her own child-life, and the happy summer days.’
Alice’s Adventures in Wonderland,  Lewis Carroll

Endings can fulfill our expectations or turn them upside down. There has to be a satisfying resolution of sorts, be it a prediction of things to come, a solution to a problem, a clarification or an intention. The main characters will probably undergo some sort of change or redemption and arrive at a degree of self-knowledge and acceptance.

A quick scan of the first page might determine whether or not you buy the book, but it’s the ending that will stick in your memory.  Did you put the book down with relief that it was finally over, or in eager anticipation of the next installment?  Was your world turned upside down or were you satisfied with the way things turned out? Did you get the resolution you expected, or was the ending too vague? Was it so powerful it made you angry, or did it make you weep?

Your opinion of what has gone before will depend, to a large extent, on that final sentence or two.

4 thoughts on “Ending on a High”