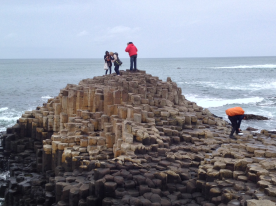 I’m an inveterate eavesdropper and people-watcher. The minutiae of other people’s lives, with all their complexities and mundanities, fascinates me. They might seem tedious to the casual onlooker, but they are very fertile hunting grounds for the writer.

A healthy dose of inquisitiveness is a useful quality for a writer and one worth cultivating.

There are plenty of occasions for observing personality traits and characteristics in colleagues, friends and total strangers in the course of our working lives and leisure activities. I’ve been lucky to work in some colourful and exciting environments, full of large than life personalities, who transfer easily onto the page, albeit with a little tweaking. I once worked in an archive which possessed a large collection of English women’s magazines from the 1930s onwards. The letters pages and Agony Aunt features in these publications were rich seams of material and ideas for short stories.

Weddings, funerals, christenings, anniversaries – in fact any functions where friends and relatives gather and old attractions and enduring enmities surface after a few too many drinks – are like gold dust to the writer. There’ll be lots of opportunities for observation, for writerly deduction, for the what if? we are always asking ourselves. I was at a reunion recently where I carried one of those daft little clutch bags that are about as useful as a chocolate teapot. I managed to cram a pencil and a slim notebook into it and I scribbled notes about how various ill-matched guests might be living completely different lives if only they’d met earlier/never met at all/run away together to a South Sea island when they’d had the chance.

But how much of our personal lives and experiences should we use in our fiction?

If there’s a possibility that that a shared experience might be recognisable, or that a real person might be able to identify themselves, we run the risk of ruining a relationship, tainting a friendship, or even being sued. So it pays to be mindful of what to include and what should be off-limits. Dead people can’t be libeled but a living and breathing relative might take offence at a comment we had judged to be light-hearted gossip.

I’m in the unusual position of living with someone who inadvertently supplies me with amusing anecdotes every day. My dear mum in law suffers from Alzheimer’s and she’s already a mine of information about her childhood, schooldays and early working life, which she remembers vividly. But lately an interesting new layer has been added to these tales.

She has no idea what day it is, what month it is, or the name of the current Prime Minister, but this morning Mum is quite insistent that Prince William dropped by earlier on an inspection and she took a shower prior to his visit. So no, if it’s all the same to me, she won’t be taking another. And, she reminds me, a car will be arriving soon to take us to the Palace. She looks me up and down. ‘You’ll have to wear a hat,’ she says.

Now, the aristocracy have not figured very large in Mum in law’s life until now, and these royal manifestations are all a bit strange, to tell the truth, but now that these people loom large in her alternative universe, I wonder if I can put them to work in mine.

I’ll change the names to protect the guilty.

2 thoughts on “Watching the World Go By”