Now that Spring finally seems to have arrived in the garden, my thoughts have turned to my own green shoots – those budding ideas I’ve actually turned into stories. How did I get to this point?

My writing journey (is that a cliché these days?) started several years ago. Although most of my friends and family were encouraging, I doubted I had the staying power when I set off, but I wanted to try. And here I am with two novels published and a third in progress. Wow.

Along the way I’ve encountered difficulties and disappointments, highs and lows, but I’ve never lacked Advice. So, in retrospective mood, here are my reflections on the huge amount of writing advice available. What’s actually been useful?

Writing is a bit like cooking. Some people have a natural talent; some can cook up a storm with just a little imagination; others need step by step guidance to perfect that winning dish. The most inventive writers don’t follow instructions slavishly. Once they’ve grasped the basics they go wherever the creative muse takes them and that magical alchemy of characters and plot is the result. Wise beginners will look for advice.

Next time I’ll go into more detail about story construction but let’s start with some more basic questions:

Is it too late?

It’s never too late. I started writing when I was still employed, but I didn’t get going properly until much later, when I retired and had more time to devote to it. That’s not to say you can’t write a novel around your working life, it just takes more organisation and determination. Less social media and television.

Lots of people tell me about the books they would write if only they had the time. I’d be a brain surgeon, but hey… I try to be positive but realistic, because many of them lack a very significant feature: a storyline. Throwing several characters together, trusting that they’ll find a plot somewhere along the line is a vain hope, unless you’re very accomplished. And readers want a story. They want to be engaged by a bunch of irresistible characters tussling with an interesting plot. They want to be entertained, they want to care.

Do you need a plan?

Some writers plan everything. Some never plan. It’s up to you and what suits your personality. Plans are useful for beginners, even if you tear them up and throw them away in frustration when you make that marvellous discovery that your characters will go their own way, anyway.

In the right place. Which might not be the beginning. But this might only become apparent after you’ve got several chapters, or even the entire book, under your belt. Keep your options open. You might think you’ve got to introduce your main character gently, giving her a whole load of character-building backstory in the first few pages. But readers won’t thank you for taking them on a boring bus journey just so you can show them how much your character hates public transport and her fellow human beings first thing in the morning. You’d be better off throwing her under the bus and watching how she reacts. Start at a point of conflict. Get to the crux of the story and keep the action flowing. Feed the backstory in later.  Write those first chapters by all means – they’ll provide useful background to help you build your characters – but you might delete them later.

It’s easy to get bogged down in the dos and don’ts of writing even before you pick up a pen or sit at a keyboard, but basically, you need to start writing. Don’t spend time worrying about whether you’ve got the right personality, or if you’re too old, or too young. If you’ve got a story to tell, get on with it. You could waste a great deal of time reading about writing but you have to discover your voice, and there’s only one way to do that. 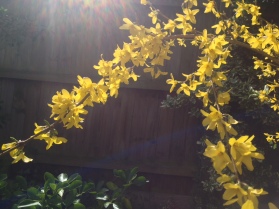